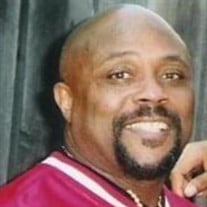 Ellis F. Williams, Jr. was born on August 15,1956 to Ellis F. Williams, Sr. and Myrtle Barnes Williams in Lake Charles, Louisiana. The family relocated to Berkeley, California where he attended St. Columba and St. Mary's Catholic Schools. He graduated from Berkeley High School in 1974 and attended East Bay Skills Center where he learned welding as a trade. He worked throughout his career as a welder and later retired from Berkeley Forge and Tool after 25 years of service. He enjoyed football, boxing, cooking, camping, and a good intellectual argument. Ellis passed away at the age of 63 after a brief illness on May 3, 2020 at Kaiser Hospital Vallejo. Ellis is proceeded in death by his father, Ellis F. Williams, Sr., and his son Ellis F. Williams, III. He leaves to cherish his memory, the love of his life Diane Dally, his mother, Myrtle Williams; daughter Monica Williams; his grandchildren; Ellis F. Williams, IV, Jayvian, Marcellis, and Major, two great-grandchildren, Amora and Skaii Williams; sisters Darlene, Claudia, and Wanda Williams; brothers Darrell Sr., Carey, and Andre Williams, and his special four legged friend, Lucky. He will be missed by a host of other relatives and friends.

The family of Ellis Frederick Williams, Jr. created this Life Tributes page to make it easy to share your memories.

A comforting word from you means a lot.

Send flowers to the Williams, family.